We have appointments available today! Please schedule your appointment in the form below. 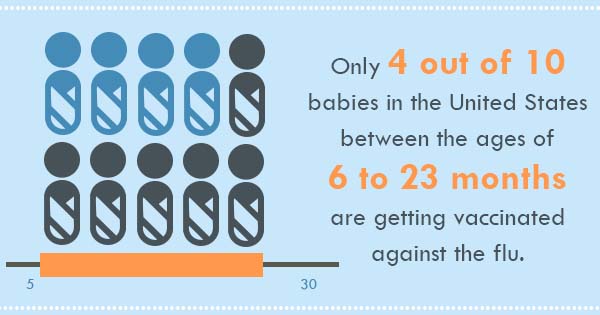 According to a new report released by the Centers for Disease Control and Prevention (CDC), children are the ones who need flu shots most. Federal health officials revealed that only four out of 10 babies in the U.S. between the ages of six and 23 months are getting vaccinated against the flu.

The results were based on data analyzed from the 2011 and 2012 flu seasons. Between this current flu season and the 2002-2003’s, vaccination increased from just under 5% to almost 45%. Although this may be a big jump, it still falls short of the CDC’s recommendation that children aged 6 months and older get one flu shot per year.

“While flu vaccination for children has gone up, there is still a long way to go to protect every child,” said Tammy Santibanez, lead researcher and epidemiologist with CDC’s National Immunization Program.

Influenza is a serious and at times life-threatening illness. Annually, around 20,000 children under the age of five are hospitalized due to flu complications. One of the best ways to prevent this from happening is to get children over the age of six months immunized once a year during flu season.

Luckily, the advent of urgent care now makes it easier than ever to get children immunized. Over 85% of urgent care clinics are open seven days a week, with 91% of them open after 7 p.m. and prior to 9 a.m.. This means that no matter what your work hours are, there’s always a convenient time to take your child in to get their flu vaccine.

Additionally, urgent care centers provide affordable means of medical care — including vaccines. In fact, a typical copay at an urgent care clinic is typically around $35 to $55.

“Vaccination is the first and most important step parents can take to protect their family against the flu,” Santibanez said. And indeed, it is a vital first step to keeping children safe, preventing them from missing school, and preventing flu-related hospitalizations.