We have appointments available today! Please schedule your appointment in the form below.

Getting medicine when you need it in America isn’t too difficult most of the time. Knowing how and where to get your medicine and healthcare is important, though. While many still believe the Emergency Room to be the go-to destination for any injury suffered while primary care physicians are unavailable, it’s actually Urgent Care centers which are most effective when it comes to non-life threatening injuries.

There are a few reasons for this. To begin with, Urgent Care facilities typically have longer hours than normal doctor’s offices. The capacity at an Urgent Care is usually higher than that of a physician’s office, meaning that you are likely to be seen or treated much, much sooner than you would be if you waited around for an appointment with your doctor. In America, the average wait time at an urgent care center is less than 20 minutes.

The cost of a visit to urgent care is also much lower than a trip to the Emergency Room, which is one of people’s most commonly cited concerns about paying them a visit. While E.R. trips can run thousands of dollars deep into a person’s pockets, the average insurance copay for a trip to Urgent Care is only $35-$55. Combine the lowered cost of these visits with the fact that wait times are virtually nonexistent compared to the E.R., and you’ve got a recipe for a great alternative to the hospital. 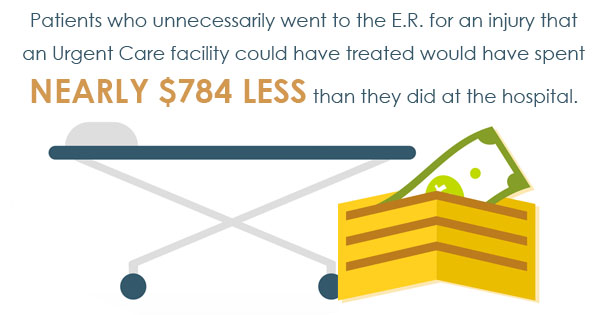 Researchers determined that patients who unnecessarily went to the E.R. for an injury that an Urgent Care facility could have treated would have spent nearly $784 less than they did at the hospital. Time-wise, it’s estimated that patients would have also saved up to three hours of their time.

For the above reasons, and many more, insurance companies, physicians, and many others in the healthcare industry are recommending people consider visiting their local Urgent Care, rather than the Emergency Room.

It’s practical in another way, too. Think of the number of lives that may potentially be saved by leaving open seats in the E.R. for people who are in more desperate need of care than you might be — they can get treatment sooner.